A Listening & Research Analysis of Halsey & Her Featured Tracks

Since Halsey first went to Twitter to announce a free pop up show downtown Minneapolis, MN, fans haven’t stopped raving about this once in a lifetime experience. With only four days' notice, Halsey effortlessly packed The Armory with over 8,000 fans who got the chance to experience her debut her latest single, “Nightmare”, live for the first time. Due to the high demand for tickets, The Armory opened the doors to the public early for those to come out and see the show on a first-come, first-serve basis. Coming up on almost a year ago today, Halsey graced Minnesota with a most remarkable performance back in May of 2019.

Halsey’s talent for creating such rare concept albums through her adept songwriting skills speak fairly as loud as her astounding vocals, and overall musical capabilities. Although her subliminal, fan engaging marketing tactics to promote her music are just as impressive. The way Halsey correlates the promotion of her music using Twitter to paint a picture promoting the release of each album beginning with her debut album, Badlands, and throughout the release of her sophomore album, Hopeless Fountain Kingdom, as well as the release of her latest singles, “Without Me” and “Nightmare”, is an admirable talent within itself. 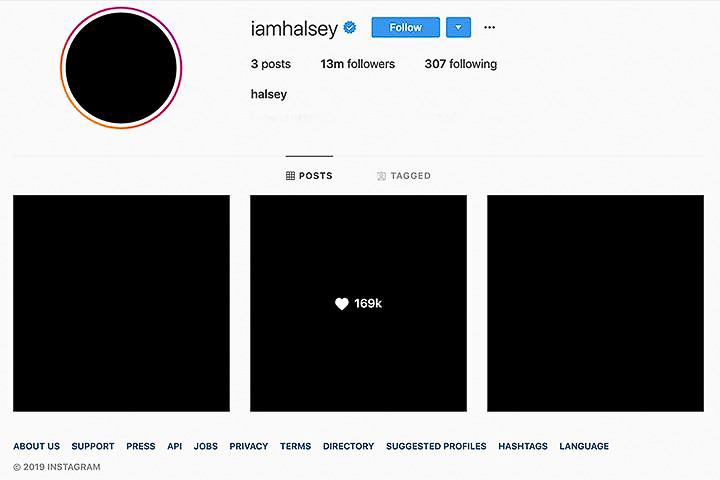 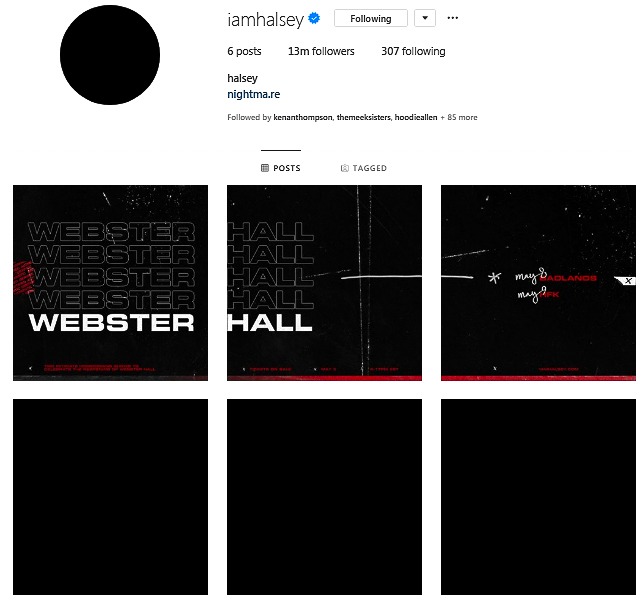 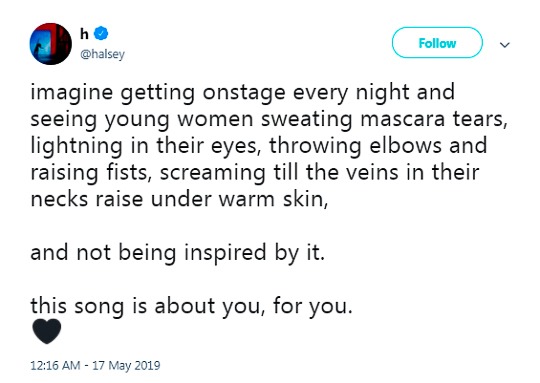 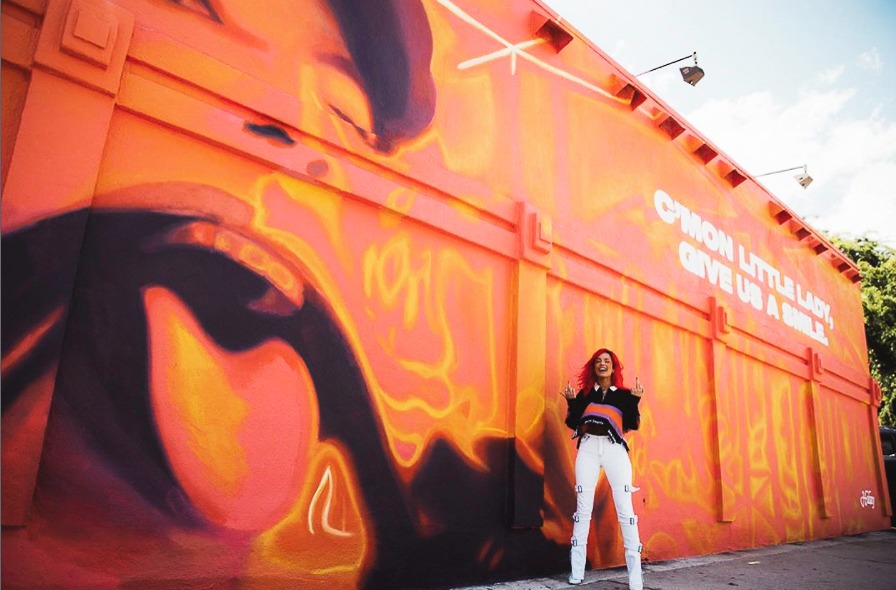 With a gift for writing concept albums, Halsey’s lyrics depict an emotionally empowering story throughout each song she writes. Throughout the order of her setlist for her pop up performance at The Armory, she created a story within the setlist itself.

Halsey stormed onto the stage to open her set with her track, “Castle”, the first track from her debut album Badlands. In this song, she cryptically depicts the beginning of the journey of unforgettable chapters highlighted during the whole performance at The Armory. Halsey’s lyrics portray feelings of falling victim to fears and misfortunes that arose with her fame.

‘A fear of that normality is not achievable’, Halsey sings, "Sick of all these people talking, sick of all this noise. Tired of all these cameras flashing, sick of being poised. Now my neck is open wide, begging for a fist around it. already choking on my pride, so there's no use crying about it”, expressing her sense of pride while maintaining her dignity is the very thing suffocating her when coping with the personal matters that hold her back. Despite the truth that there is no use in complaining about obstacles Halsey has overcome, she chooses to continue to go and face these obstacles head-on.

“Castle” features the Latin phrase, “Agnus Dei” translating to “Lamb of God” which references the Bible verse, John 1:29 in which states, “Behold the Lamb of God who takes away the sin of the world.” In a sense, she views herself as a sacrifice to unrealistic expectations of the music industry and to her fans, who have placed her image on a pedestal, In between the lines of Halsey's lyrics:

"I'm headed straight for the castle, they’ve got the kingdom locked up and there's an old man sitting on the throne that's saying I should probably keep my pretty mouth shut.”

Her conquest of the castle represents her breakthrough into the music industry, only to be forced to break through intense barriers including sexism, discrimination, amongst other ill-mannered normalities within the music industry. The 'Castle' is in reference to the gates that open the entrance to The Badlands, a fictitious metropolis outside 'Room 93' in which Halsey says represents her mentality where “cognitive activity happens''. 'The Badlands' refers to her reality as if she feels trapped in the limelight. Halsey refers to the “old man” as a patriarch that warns her not to attempt to fight the system as if she is inferior and will only harm her. These lyrics summarize a captivating story throughout her debut album from the perspective of her mental state while enduring male-dominant driven ideologies within the society of the ‘Kingdom’. 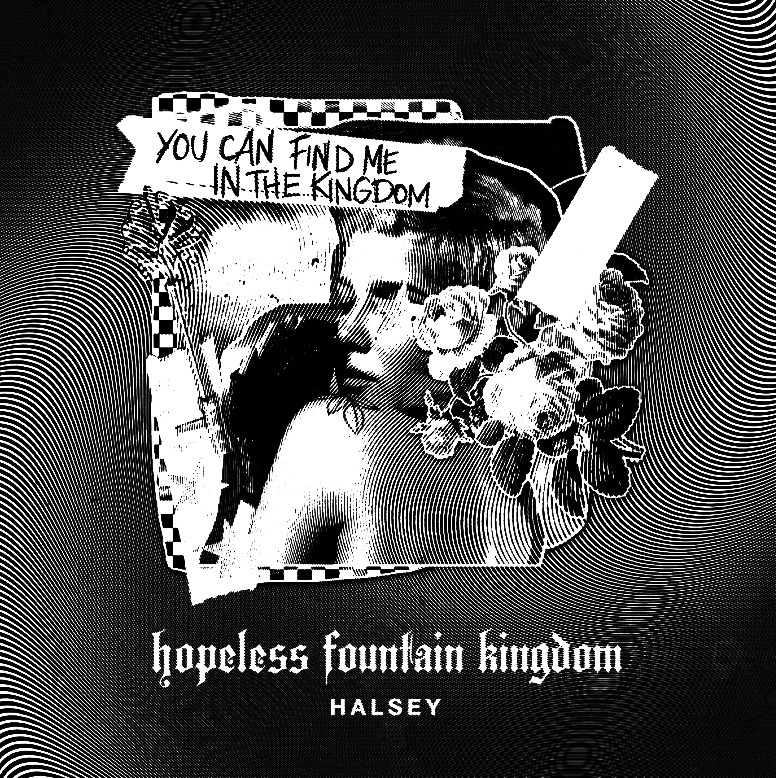 Hopeless Fountain Youth was inspired by the ‘Romeo and Juliet-esque’ relationship, portraying Halsey and Luna hiding their love for each other in secret. Whereas, Halsey singing, “I can put on a show”, therefore implying that Luna is living in the shadows. Although House of Aureum is considered a house of rebellion and even though she may be evil, Luna claims to be pure and lies to protect the name of her family and the House of Aureum.

This specific house party is in reference to the House of Aureum, a fictional family Halsey has created for her sophomore album, where Luna’s family resides, having many similarities to the Montague family from ‘Romeo and Juliet.’

As flames blew up from the stage, shooting up to the ceiling, the crowd erupted with commotion as Halsey began to debut “Nightmare” live, for the first time. Her powerful voice spoke of concern from expectations of ‘what it’s like to be a woman in today's society when referencing her lyrics including the verse:

"No, I won't smile, but I'll show you my teeth. And I'ma let you speak if you just let me breathe. I've been polite, but won't be caught dead. 'Cause kindness is weakness, or worse, you're complacent. I could play nice or I could be a bully. I'm tired and angry, but somebody should be. “Come on, little lady, give us a smile" No, I ain't got nothin' to smile about. I got no one to smile for, I waited a while for A moment to say I don't owe you a goddamn thing."

Before we knew it, the ground began to shake from beneath our feet thanks to the likes of all the fans jumping up and down, celebrating this live debut of a new age, punk rock anthem. The whole venue radiated with passionate electricity that could be felt from miles away while, as the crowd sang the lyrics to the chorus and outro:

Whereas lyrically, "Nightmare" was a follow up to her track, "Devil in Me", as featured on her album, Hopeless Fountain Kingdom, Halsey wasn’t joking when she stated earlier in 2019 that her new album would be a “loud one", having proved “Nightmare” to be the most empowering anthem for women today in society. Encouraging women around the world to raise their voices and stand up for their rights, Halsey has and continues to vocally expose unspoken truths within the music and entertainment industry since the release of her first EP, Room 93, back in 2014.

Halsey plays a major role in Women's History Month, representing one of the many creative individuals using their voice to influence positive reinforcement and awareness of topics that often go left unheard.

jackLNDN Dives into Depths of the Unknown with the Release of His EP, Deeper

Megan Hamilton & Will Robinson Rule Electronic Dance Music with the Release of "G.R.E.A.M."